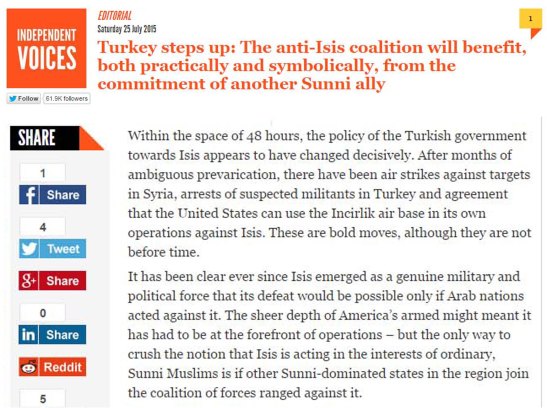 If my comments on the astounding ignorance shown in an editorial on Turkey and the Middle East published in yesterday’s Independent needed any proof it came today from nowhere other than today’s Independent.

Within 48 hours of Turkey’s decision to join the bombing of Isis in Syria, Recep Tayyip Erdoğan, president of Turkey, revealed the breathtakingly cynical reasoning behind the move, when he sent planes into Northern Iraq to bomb the Kurds.

Fights for Kurdish independence have been a continuing thorn both sides of the border between Turkey and Iraq for several decades. A ceasefire between the Kurdistan Workers’ Party (PKK) and the Turkish government was seen to have been broken by the killing of two police officers last Thursday. Though the HPG, the armed wing of the PKK, has admitted carrying out the attack, they claim it was retaliation for a suicide bomb attack in the Turkish town of Suruç, near the Syrian frontier, which took 32 lives. The Kurds accused Turkey of being responsible for the Suruç bombing, in what would’ve amounted to a false flag operation to justify bombing Kurds in Iraq. Meanwhile, Turkey has pointed the finger at Isis. In light of the profound cynicism Erdoğan has displayed, especially with his sudden about turn on aerial bombing of Isis in Syria, the PKK have very good reason for their claim.

There is one tiny problem to all the skulduggery going on behind the scenes in Ankara. A problem that will almost certainly counteract the extra capacity afforded by the addition of Turkish planes to the coalition attacks on Isis in Syria. So far, aerial bombing has proved to be the least effective strategy in the war against Isis. The most successful battles against Isis have been fought on the ground in Northern Iraq by – you’ve guessed it – the very same Kurds Erdoğan is now bombing. If Erdoğan is allowed to continue attacking Kurdish forces in Northern Iraq it will inevitably lead to their weakening. This might serve the real aims of Sunni extemists elements wielding power in Turkey, Saudi Arabia and the Gulf. In common with NATO, these nations have shown little or no reluctance in sacrificing as many lives as it takes to achieve their ends. The goal of Sunni extremists is to achieve military superiority over Shiites in the Middle East solely in order to eradicate them. Whether the lives sacrificed belong to friend or foe is of no matter once they are perceived as obstacles to them achieving their ultimate aims. For, up until very recently, all parties to the war on Isis have lent financial and material support to the organisation one way or another. Arms, munitions, food, transport, medical aid and finances have all flowed its way. Though a little less obviously, they are probably still doing it.

But, if you think the Sunnis are plumbing the deepest depths of cynicism, their Western cohorts must take the biscuit in this bloody enterprise. As I wrote little more than a day ago: “Come to that, why go to all the bother of bombing Muslims if you can get them to do it themselves?” Though it pains me to say it, it really does seem the U.S. and Britain – in particular – don’t care which side is bombed as long as both are Muslim. Somewhere along the line our Western governments, and mainstream media, have lost their moral compass, and are leading us all into a morass of sheer evil.

So what will the Independent’s view on this latest development be? My hunch is they will look the other way.